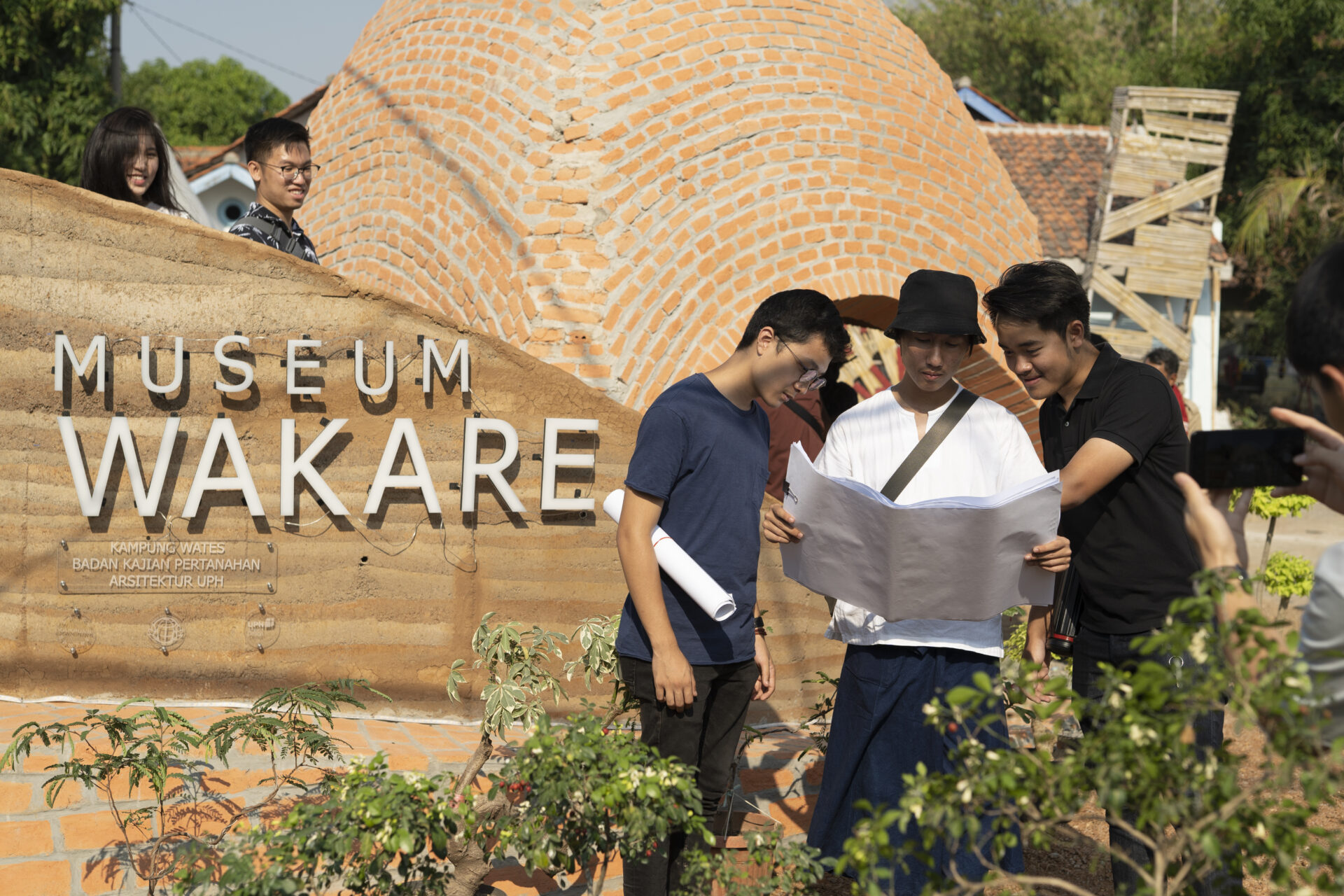 WAKARE MUSEUM is a community-based museum of history planned by Indonesian Art Organization Jatiwangi art Factory (JaF) along with local Wates residents, Architecture students and faculty of Pelita Harapan University. It is located at an open area outside of the community center. The museum, at first glance, looks like a monument made of clay, and it is. It is a monument built to remember the history when local residents fought for their land against the Indonesian Air Force.

A Farewell Song Became the Only Evidence

JaF found this story when studying the history of the community and wanted to pass it down. After discussion with Wates residents, they decided to establish a community museum and the name “WAKARE MUSEUM” originates from that folklore. The materials were clay from the seven regions occupied by the Japanese Air Force and from Wates, and bricks and concrete. JaF invited students and faculty from the Department of Architecture to build the museum with them and the museum was completed within half a month. A grand opening was organized by JaF and the community in October of 2019 during “Hari Gotong Rumah” (House Moving Festival).

Hari Gotong Rumah has been organized for the 5th year to remember the history when the Japanese Air Force occupied their land and the residents were forced to leave their village in 1943. On that day, residents would ritually carry a house made of thatch and bamboo and say prayers. They would also dance and dine on the streets and sing the symbolic folklore WAKARE together. JaF wants to not only pass down the story, but also connect the community to show the government their determination to fight for their home.

The fact that WAKARE MUSEUM was built by clay and tells the story of the land shows the close relations between the community and clay. In fact, the museum is located at the largest tile manufacturing city Majalenka in Java. JaF has been implementing the Kota-Terakota (Red Clay City) Project at the local community for five years in the hope that the sense of belonging and the visibility of local industries can be increased through contemporary art. For instance, they have organized bodybuilding competitions every summer for tile movers, developed a juice brand through collaboration with local farmers, and organized an event with thousands of people playing ocarinas and tiles.

The Indonesia Contemporary Ceramic Biennale organized by JaF in 2019 is the starting point of the whole project, and also the foundation for local ceramic culture to develop in the long run. Instead of conventional display of artworks, the biennale organized a variety of community activities and artist-in-residence programs and invited local and international artist to create artworks inside the community.

The Bamboo Curtain Studio has collaborated with JaF on the artist-in-residence program in 2019 and 2020 and Taiwanese ceramic artist Huang Wei-Chien was selected for the program. During her residency, she has worked with the local school and hosted a bird flute workshop. In 2020, JaF will have a new annual program under the theme “Harvesting the Energy”. Get ready to feel the vibe of the red clay city!