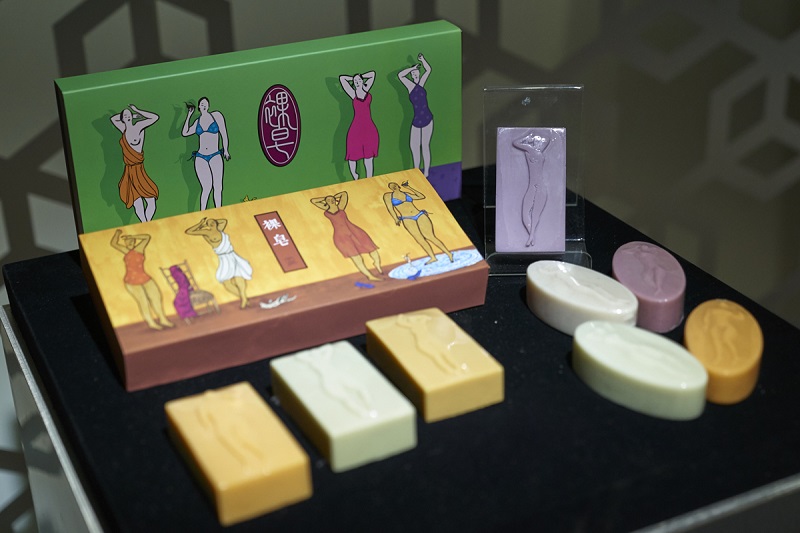 Nude Soap, a product made by Kaiak, is an example of how the museum has authorized images for transformation into marketable cultural products. (Photo by Huang Ying-Che, 2018)

Social enterprise from the perspective of the museum

The relationship between museums and society has always changed with time and context. In a departure from traditional concepts of museology, in the 1980s “new museology” emerged and brought with it a wave of reflection on the traditional functions of the museum. Considered from the perspective of public needs, the contemporary museum is no longer just an institution for preserving cultural relics and transmitting knowledge; rather, it is a public space in which people can produce their own sense of what art is. In response to public expectations regarding museums, an important conceptual shift has occurred in the contemporary museum world and led to a paradigm shift in the museum’s core proposition.

If this paradigm shift involves the museum’s relationship with society, in this wide-ranging and multifarious topic for discussion, exploring the function and role of the museum from the perspective of “social enterprise” may yield a basic principle for constructing a new model for museums. Senior scholar Stephen Weil has always been a major advocate of museum diversity; nevertheless, he believes most kinds of museum should conform to a new mainstream value in terms of their mission, function, and goal—namely, to integrate the concept of social enterprise in their operations.

In Europe and the US discussions abound about the relationship between museums and social enterprises, mainly owing to those regions’ development of the concept of the social enterprise and the high proportion of museums that self-finance. By contrast, because most public museums in Taiwan rely on public sector budget or funding, thinking about social enterprise here is more focused on museums’ social responsibility. This text summarizes the notion of social enterprise for museums as non-profit organizations operating on a social enterprise business model that is still under development and that traditionally rely on government subsidies, corporate sponsorship, and charitable donations, but which are gradually transforming into social enterprise institutions capable of applying innovative market principles to achieve their social mission.

The museum as a cultural and creative charity

In addition to the four traditionally recognized functions of the museum—collection, research, exhibition, and education—modern museums have developed a “fifth element” of cultural creativity, and this has gradually become a trend across the world. Cultural creativity and social value seem to be at two different ends of the spectrum, and a topic worth discussing is how to meet the needs of contemporary society in the context of this global trend. The author believes that a model based on the core concept of “cultural creativity for public charity” may be a direction for Taiwanese museums.

The idea of cultural creativity for public charity is based on the idea of turning non-profit public museums into social enterprises, integrating the characteristics of both social and business models. In terms of actual operations, pilot projects may be used to build consensus, mainly among public, social, business, and art sectors (i.e. museums, social organizations, enterprises, and art and cultural industries). The museum is used as a platform to integrate various professions and resources for cross-field cooperation, covering content from the front end of the cultural and creative industry chain (licensing images), the middle-tier (planning product design transformation and production) and back-end (sales channels and marketing), trying to construct a cross-domain, sustainable and innovative business model. These ideas are represented in the schematic diagram below:

Integrating the concept of social enterprise into museum practice

This text takes the example of the National Museum of History (NMH), which is trying to integrate the concept of social enterprise in the industrial chain of museum product development and production through the development of cultural and creative business. From 2012 to 2014, the NMH collaborated with Victory Glass Studio in Taipei and Leshan Nursing Home in New Taipei City. With the former, it produced a series of 12 handmade colored glass products entitled “Tranbo Art”, one of which won the Quality Award at the 2014 Taiwan Good Craft Awards. With the latter, “Art Healing”, we assisted nursing home residents in transforming their creations and developing products. These innovative attempts at cultural creativity have spurred the NMH to expand and launch the Cultural Creativity for Public Charity Pilot Project.

So far, the first two phases of the project have been implemented—the Glass Highlights Project (2014–2016) and the Books as Jade Project (2016–2017). The partner in the Glass Highlights Project was the Taipei Victory Glass Studio, which stands on the site of Taiwan’s first home for children with polio. Since the development of colored glaze handmade products in 2008, the studio has had comprehensive techniques and product lines, so the core goal of the project was to help the studio to upgrade its brand by licensing images of paintings by Pu Xin-Yu (in the museum’s collection) to enable the studio to develop a series of mainly glazed glass products.

The partner in the Books as Jade Project was the Agape Sheltered Workshop, which is affiliated with Aggregate Joy Polio Care Association. The first officially registered sheltered workshop for the disabled in Changhua County, Agape earns an income mainly through printing but is hoping to transform, so the core goal of the cooperation was an industrial upgrade. Images of paintings by Chang Yu (in the museum’s collection) were licensed to the workshop, which developed products with high added value, including 3D printed products and fabric paintings.

The two-phase project has raised total funds of NT$4.5 million, attracted participation by 20 companies, used 20 digital images from the museum, and developed 20 demonstration products, nine of which have been commercialized and put on the market. From 2014 to 2018, the NMH also held a series of special exhibitions and press conferences on products created under the Cultural Creativity for Public Charity Pilot Project. In addition to exhibiting in the main hall at the NMH, six exhibitions were held at the Taipei Songshan Airport Exhibition Area, Songshan Cultural and Creative Park, and the Taipei branch of the National Taiwan Craft Research and Development Institute, and we worked with the TVBS Foundation to produce documentaries and themed programs.

In the four-way cooperation model, if we conduct a social return on investment assessment (SROI) from the museum’s perspective, the resources invested by the NMH consist mainly of museum personnel and the licensing of images from items in the museum collection. This means the cost for the museum is a professional contribution rather than a monetary sum. On the other hand, the products created by social organizations are more competitive in the market because the museum provides preferential licensing arrangements, and the extra profits thus created will be kept by the social organizations themselves. Overall, the benefits of the project outweigh the resources invested, as can be seen from the quantifiable product profits and saved costs for media exposure, as well as non-quantifiable benefits including assistance to social organizations in the form of industrial upgrades, the creation of new customer bases, and the enhancement of brand image.

From the perspective of social innovation, the Cultural Creativity for Public Charity Pilot Project can be regarded as a social experiment which integrates museums with the concept of social enterprise. Its core value lies in the fact that public charity serves society, while cultural and creative benefits creativity and culture, and on the one hand the combination of cultural and creative operations of museums and social welfare satisfies the museum’s role as a cultural institution for social participation and actively uses the museum’s own characteristics to meet society’s expectations towards the museum. On the other hand, from the perspective of a social approach to the cultural and creative industry, it breaks the assumption that the cultural and creative industry is just another type of business, and uses image licensing as a more flexible application of the value of collections, thus creating a platform where social resources can be integrated and bringing museums closer to people’s daily lives.