From 1949 to 1991, the Kuomintang government imposed the martial law that saw the suppression and hunting down of Taiwanese elites, members of unregistered revolutionary parties, and political opponents. During this period of White Terror, countless anti-government individuals were labelled political criminals and were either imprisoned or executed by shooting. Sixty odd years later, Taiwan has become democratized. The current government is promoting transitional justice and has established the National Human Rights Museum in order to recover the truth. Officially, the White Terror is generally defined as wrongful cases that the authority fabricates for the purpose of suppressing dissidents. However, “The Red Bloc: 2014-1949”, an exhibition organized by the Art In Action and co-organized by Assignment Theatre and Taiwan Area Association for Political Victims Mutual Aid, seeks to provide a different historical narrative of the White Terror. This article will reflect on the official mainstream interpretation of the White Terror through the experience of “The Red Bloc: 2014-1949”.

The danger of a single narrative and a binary opposition

The National Human Rights Museum was inaugurated by President of Taiwan Tsai Ing-Wen in May, 2018, and in the ceremony, she said that as the first human rights museum lain on an unrighteous location, the National Human Rights Museum should share the experiences of Taiwan’s democracy and human rights development with the world, enhancing Taiwan as a self-introspective country. A national museum is a place for learning and reflecting history, the curator and the team should avoid making a narrative with a single story or binary oppositions. By displaying historical relics, viewers can directly look at the truth of history instead of obeying any perspective a museum conveys.

While discussing the history of the white terror nowadays, due to the differences of political identity, the victims and elites of different parties have their own interpretation of this period. The types of the white terror narratives can be divided into two kinds: one is the history of the authority suppressed revolutionists and protesters, the other is seeing the white terror as a part of time when the government cracked down the dissenters with state apparatus, and victims of political persecution are caused by intentional injustice. The opinion of the latter is based on the rising of Taiwan nationalism and the actual situation that official system of domestic museums overly rely on cooperative vendors [1], allowing this narrative becomes a mainstream theory and declining the position of official announcement that it’s for KMT to purge left-wing underground party in the cold war. In fact, the resistance towards the Taiwan government is not simply a binary opposition of nationalism but presenting different thoughts and sides and developing ideology. Ho Shen-Hong had got together the cases on politics under martial law and make them eight kinds: the crack down on the speech and act of pro-communist and left-wing, suppression towards the advocate of Taiwan independence, aboriginals, democratic movements, the political power struggle, literary inquisition, the power struggle inside the agents organization, and the reward of the agents leading to unrightful trials.

Non-governmental organization provided another exhibition “The Red Bloc[2]: 2014-1949” in 2014 towards the white terror which approaches the incident differently. This exhibition was held by AIA (Art in Action), and co-organized by the assignment theatre, Taiwan political victim’s association, Treasure Hill artist village. Each of the four artists are allowed to use a 66 square meter space each to create 4 exhibitions located inside space no.52, no.54 and no.71. The four artists used different perspectives to explain the reason how the white terror happened, why the government used violent act and did it naturally. They expressed the white terror differently by displaying historical relic, through a magical realism touch, the artists interacted and re-constructed the period of white terror with the viewers.

In “Roaming in Taipei”, created by Chang Zhi-Ying, Chang decorated the space with daily scene inside the MRT and marked the location which governments once imprisoned and executed victims in the route map, overlapping the present and the past. This work is to imply how the authority monitors and hunts people in daily lives, and also shows the serious consequence of disobeying the regulation.

Going upstairs, you will see the work of Guo Yu-Ping “Eastern Messiah”, displaying the books, advertisements and government flyers of 1950s, when the publication was restricted and had been a tool for government to preach. On one of the walls inside the exhibition, Guo arranged all kinds of propaganda including Chiang Kai-Shek’s New Life Movement, Chinese ethic, happy family, revolutionary for saving your country, advanced life in U.S.A. and the anti-communism; on another wall, Guo puts his own works “Delays and Cavities”, “Eastern Messiah – the road” and letters left by victims, which in opposing positions to those fairy tales. Guo implies that underneath the wonderful illusion of anti-communism alongside U.S.A as a progressing country is the society full of destruction, industrial pollution and aging labor force.

The next exhibit “No-Land” comes up when you walk to the other side of the exhibition. Artist Lee Zhe-Yu cut acrylic sheets into gravestone shapes, scattered in the water pool, symbolizing the corpses of the victims soaked inside the formalin at the National Defense Medical Center, dissected by the center to demonstrate human body to Medical students or displayed to students from department of fine arts to observe body and muscle structure. The acrylic sheets are demonstrated randomly symbolizing the tombstones found by Taiwan political victims association in 1993 at the mass grave of the white terror located in Liuzhangli, still waiting for their families to recognize. The water source of the pool is covered by toy soldiers, indicating the scene of standoff between the United States and Soviet Union at the cold war. The origin of this suppression is brought by the harsh vibe under the situation of pro-U.S.A and anti-communism. 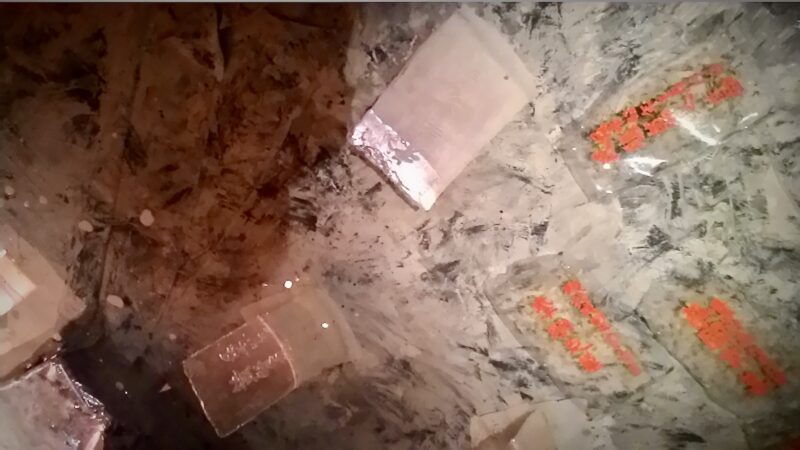 The last work is Hsu Meng-Xiang’s “Echoes”. Hsu arranged the space like a prison chamber with the lyrics of four songs “R.I.P.”, “Why don’t we sing?”, “Spend this cold winter” and “Fight in Youth” written on the floor. Through the audio devices, the singing from one of the victims, Mrs. Feng Shou-Er echoes in the room, recreating the scene where the rebels in the military prison located in Xindian sung their last goodbyes to the partners who died a hero. What a tragical and unbearable moment in the history.

Running away from the restriction of power and culture, and presenting the diversity of history

Zhong Qiao, the head of the Assignment Theatre, mentioned that the exhibition not only represents all the sufferings from the slaughters throughout the history of white terror but also the history that has been erased. How do we face the history when graves in Liuzhangli were excavated now? The story of Mrs. Feng Shou-Er had been displayed in the exhibition “Absent prisoners in person – Oral narratives from the female family members in the white terror” in Jing-Mei White Terror Memorial Park after one year. The stories of Feng Shou-Er, her brother Feng Jin-Hui and her husband Chen Ming-Zhong being detained and executed is in the brochure of the exhibition and the museum. But why did they participate in the fight? What were their claims and experiences joining the underground party? The answers are nowhere to be found in all these exhibitions, making it much more difficult to assemble different narrations from all the groups from the white terror and put together the whole puzzle. This situation also results in losing the opportunity to share the pain of the whole story with the public. Although there is only one truth and fact of our history, for diverse political parties and for those solving political issues, the memories have various aspects with different social expectations and narratives. We look forward to having a political community that can share different historical narratives and understand each other’s view and opinion. When speaking of running a museum, Lin Zhong-Xi brings up the concept of “The Gray Museum” and proposes the view of making a museum the public forum, finding social issues and providing diverse viewpoints with no limits.

In “The Red Bloc: 2014-1949”, the curators used wider historical structures to tell the stories of the white terror from the usual official statements. Standing in the crossroad of time over the past sixty years and the present, we try to feel the era of thought suppression. Now we can easily discuss the history of the deceased, but how many claims of them do we remember?