【Museums Link Asia-Pacific】Musée de l’Homme – Us and Them: From Prejudice to Racism 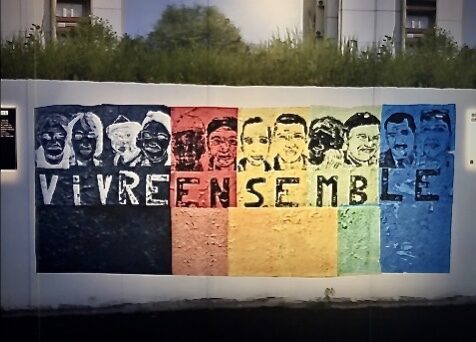 In recent years, discussions on the subject of racism have continued to grow around the world. Even with the best efforts from many to promote social inclusion, the infusion of different demographic groups has made different countries’ society growing in diversity, while also creating tensions and confrontations under the facade of society. In its special exhibition “Us and Them: From Prejudice to Racism", Musée de l’Homme in France attempts to explore the origin of racism, reflecting on the issues hurting France and contemporary society, while calling for the general public to think about the threat of racism.

The special exhibition “Us and Them: From Prejudice to Racism” is curated with racism as the topic, hoping to raise public awareness to racism. In fact, the gene difference between different races is not big enough to be categorized by races, so when people start to differentiate groups by “We” and “others”, it is very common that they are discriminating without noticing. The whole exhibition is designed with three areas: “We and Others”, “Races and History”, “The Situation Today”, leading the visitors to understand how discrimination started in our history to how our society is new, and to face the racism problem step by step.

A 260-sphere display is playing daily life scenes such as airports, subways, sidewalks, café etc., at the entrance of the first area “We and Others”. As the scenes play, the visitors can notice that there are different standards that classify the people inside- sex, culture, nationality, social status. Entering the exhibition, an airport departure hall comes upon the visitors sight, with a wall painted in red, and social physiology terms and their explanations listed on the wall, such as Alterity, Categorization, Discrimination, Essentialization, Ethnocentrism, Prejudice, Racism, Stereotype, and Xenophobia etc., allowing the visitors to easily notice that once the difference is declared and essentialized, it can become a strong evidence for racism, allowing racism to be rationalized.

The first part of the exhibition explains to the visitors how the concepts of “identity” and “others” are shaped, and the process from Categorization, Hierarchisation to Essentilization, to understand how racism appeared in modern times.

The gradual progress of racism

There are two subheads for the 2nd exhibition area: “The Racialization of Group Identities” and “Institutional Racism.” During 16th to 18th century, there were two reasons that institutional racism was popular in the western world: “colonization” and “nationalism.” During this ear, slavery was very popular in the world, and it was convenient for the colonial governments to control the colonized people through violence.

In the 2nd area, visitors will understand how the racism system was established through our history. All racism starts with similar mechanisms, starting from categorization, then hierarchization to essentialization, gaining recognition in society and spreading to the media and institute, influencing the whole atmosphere. The case of how the law and scientific research were affected by the concepts raised in colonial era in France and how both fields supported each other, was brought up in the exhibition. Like the Law “Le Code Noir” that Louis XIV passed in 1685, limiting all black slaves in the colonies of France and controlling the activities of free blacks, for example, Catholicism was the only religion all slaves should believe in.

In the second area “Institutional Racism”, three examples were displayed “The Holocaust”, “Racial Segregation in the United States” and “Rwandan Genocide.“ In the center of the three example blocks displays one or few artifacts in each cabinet and also plays short videos related to the events.

Racial Segregation in the United States

The first blue area is about the racial segregation in the United States. Artifacts displayed are the signs in the public areas, such as the sign that says “colored go to back of bus” from 1934, or “according to the manager of Broadway, black not allowed” from 1925, and also the signs that shows black or white washrooms. People can easily feel the social atmosphere during that time through the time, location and object. Visitors can also learn from the videos that after implementing Jim Crow Laws in 1896, the segregation developed severely during 1920-1930 in the south of United States. During that period of time, blacks and whites could not attend the same school, could not go through the same entrance, blacks were not allowed to enter restaurants, parks, libraries and other public buildings.

The second area that is painted red, is about the holocaust. According to the curator Elsa Guerry, the red background shows the motif of blood and life. The artifact displayed here is the speaker from the gas chambers in the Natzweiler-Struthof concentration camp in France. In this chamber, 86 Jews were killed. There is also a video that shows how the Nazi’s developed its racial theories “Aryan race as the master race” and how the Jews were slaughtered systematically.

The third area which is green is about the Rwanda genocide. In the center of the area displays a Phillips Radio, which is also the main media that the Hutus used to broadcast their ideologies towards the Tutsis when they were reigning. The video on the wall shows the cause of the conflict between Belgium, Tutsis and Hutu. The three example blocks use strong colors and the displays to stimulate the visitors’ emotion. With a few objects along with videos explaining the incident, it highlights the meaning of to the artifacts and emphasizes the importance for the artifacts in the incident.

Introspection of museums towards their own history

There is a small area between the first exhibition and the second exhibition, where the museum reflects on itself and on the founder Paul Rivet. Paul Rivet was a very active humanitarian scholar who raised anti-racism advocate at that time. However, we cannot neglect that he also interpreted colonization as a “civilizing mission” and supported the righteousness of colonization. In fact, a lot of collections in the museum were collected during the French Colonizing expanding, and the museum claims that they are the ambassador to spread the colonies to the public. However, despite of their claims, only minor researchers such as Jean Rouch has spoken for the colonies.

Was the Musée de l’Homme anti-racist at that time? According to the journals published by museum researchers Races and Racism, although the museum itself is against fascism, anti-racism, and against Aryan race as the master race, many researchers still had the idea that colored race are secondary when they were writing their journals. Through these short discussions on the wall, the museum made a breakthrough by revealing its own history as a museum that is pro-colonization, and also reflects that although Paul Rivet enhances a lot on equality, his actions were still full of contradictions.

The connection with French society

In the third area “The Situation Today”, the museum provides a lot of information that is related to the French society like numerous data on immigration that are closely related to the French society. It is inevitable that immigrants would relate their own experiences with the data and cases in the exhibition, which are close to personal experience of visitors This area also discusses about the problems that different immigration groups encounter in the French society, allowing different visitors from different backgrounds could see the stories that are related to themselves, and could also relate to where they stand in this society, and could relate to the other groups.

The most unforgettable experience in this area, is the recording device in the center, where visitors can see short films of the 11 people interviewed in the movie La line de couleur and understand the difficulties that different immigrants is facing. An African mother Fatouma and her daughter talk about the difficulties they are facing and how they deal with it. In the film, the daughter asks her mother to let her perm her hair straight because she thinks having curly African hair is ugly, and she wants to have long straight and beautiful hair just like the other girls in her class. She also wants to dye her hair lighter so she can fit in with her friends. Fatouma tells her daughter: “I am like you when I was younger. I did not like my body, my hair, my skin; I felt I was different from other. I did a lot of things that damaged my body, like perming and dying my hair till my hair were all damaged. However, when I grew up, I changed, and now I love my body, I love all that I have. Do you think mommy is beautiful? Her daughter said yes. Fatouma then said:” That’s it! You are just like me. You are beautiful just the way you are.” Then, she keeps on braiding her daughter’s hair.

Into the local and out to the world

Director Bruno David, curator Elsa Guerry, Anne Stephan, Aurélie Linxe or discourse curator Évelyne Heyer and Carole Rerynaud-Paligo all mentioned that although their target audience are the French and they provide a lot of data and information related to the French people, the exhibition also aimed to the world. The development of social physiology, the history of racism, well-known incidents in our history, gene studies, and the media, are all topics that visitors from all over the world could relate to. While focusing on the local society of France, Musée de l’Homme also fulfills its mission to spread the words to “all human” through the special exhibition “Us and Them: From Prejudice to Racism.”

【Museums Link Asia-Pacific】Born for Art Education and Cultural Heritage: The Museum of Modern and Contemporary Art in Nusantara