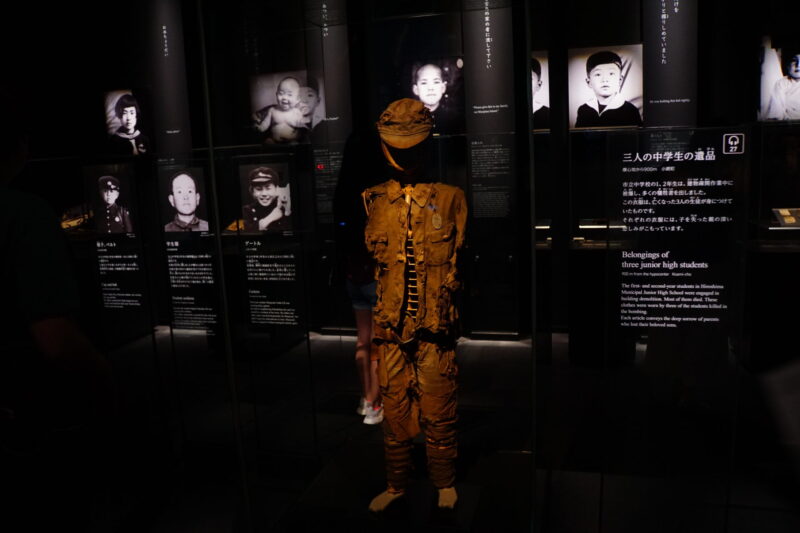 Hiroshima Peace Memorial Museum, reopened in 2019, puts more emphasis on the management of atmosphere in exhibition. Follow the visiting line, the black displaying areas turn out to be a bright aisle in the end, symbolizing the ritual transformation of collective trauma. Besides, the exhibition is dedicated to depicting the victims as the identities of “children” and “students”. Corresponding the sorrowful words and objects, the theme of peace repeatedly surrounds the exhibition.

After four and a half year of renovation, Hiroshima Peace Memorial Museum was reopened in April 2019. In addition to reducing narrative description and focusing on the display of cultural artifacts, the museum emphasized more on the management of the atmosphere of the exhibition. The display room is mainly black toned and the introductory section in front of the main exhibition hall allows the viewers to quickly acquire the background of the atomic bombing in Hiroshima by presenting the comparison pictures and CG animations of the urban area in Hiroshima before and after the bomb. Besides, at the entrance, there is a clock that is specially designed, stopped at 8:15 a.m. on August 6, 1945, when U.S. military aircraft B29 dropped the first atomic bomb in human history. After that, the downtown of Hiroshima was destroyed with more 140,000 residents killed; however, since the relative files were burned and ruined, the accurate number of deaths still has not been confirmed till today.

The story of Yukiko Fujii

The main exhibition hall is divided into four subjects: “Devastation on August 6”, “Damage from Radiation”, “Cries of the Soul” and “To Live” with the major theme named “Reality of the Atomic Bombing”, accompanied with a photo of a girl with many wounds. The girl in the photo is named “Yukiko Fujii” and her story would only be unveiled when the viewers arrive at the end of the exhibition – the bright area at the end of a long dark aisle. When the atomic bomb dropped, this 10-year-old girl was sitting in front of the desk in the house 1,200 meters away. After a flash, Yukiko Fujii was stabbed by the glasses shattered by the explosion and her right hand fingers were melted and stick together by high temperature. But she survived; got married and gave birth to two sons. She was diagnosed with cancer and treated, but the cancer spread and she refused to take therapy anymore. Yukiko Fujii died at 42 years old in 1977. We never know if the cancer was caused by radiation; however, it seems that it is the only sad but comforting story of victims in the whole exhibition. At least, she had a wonderful family life before she passed away.

Things left behind at the scene of an accident: a burnt-black safe

In the first display area, viewers can see many kinds of debris taken from the explosion site, covering from steel frame of houses burnt and bent by infrared 22 megajoule, cracked beam column of a fountain, a burnt black bike to glass fragments penetrating into walls. Every item is labelled with its original place and the distance from ground zero. There is a safe which used to belong to Mr. Bin Okada, an owner of a pharmacy, that Impressed viewers. All the documents, rice and cash inside has carbonized into a dark mass.

Then, there is a shocking display wall decorated with photos of the victims accompanied with narrative drawings from the survivors. After the atomic bomb hit the ground, the explosion was followed by black rain mixed with water vapor and radioactive dust. Moreover, the victims are not only those frontline burnt black bodies, but also the surrounding residents, relatives and disaster relief workers getting in and out the site. Their bodies started showing the symptoms of purpura and bleeding gums, and some elders and children had hair loss problem. It even caused severe incurable disease such as leukemia and cancer etc., that the victims would need to bear for life and would always face the risk of death. The display wall also presents images of the victims whose skin has gone through transplantation several times, and deformed black nails grown out due to unknown reasons, making it unbearable to look at.

The social roles of “Children” and “Students” were frequently depicted at the display of victims in Hiroshima Peace Memorial Museum. Take the exhibits “Remnants of Three Junior High Students” in the third display area for example, the museum collected remnants of three junior high students: Eiichi Tsuda, Hajime Fukuoka, Masayuki Ueda who are only 12-13 years old, and used bamboo as structure to make up an image of junior high kids with their portraits alongside. From observing their brunt cloth, hats and trousers, we can imagine those kids were injured seriously at that time. In the section of “Cries of the Soul”, it presented the shouting of victims directly with first-person narratives: “Give me water, it’s sweltering.”, “Save me, mother.”, “I don’t wanna die.”, “I am sorry that I cannot save you.” Those straight and powerful words, with all the remnants and portraits of deceased, had the theme of peace repeatedly surrounds the exhibition.

Besides, there is a special display in the fourth section about (anonym) Mr. N. Mr. N was a survivor of the atomic bombing but suffered major burns/ third-degree burns. Afterwards, his life was lingering in between starvation and works. Since if he doesn’t work, he could not raise his family; however, if he kept working, his body had to endure severe pain. When his wife passed away, he planned to take his daughter and suicide together, but he gave up and lived his remaining miserable life. Mr. N died in 1967 with hundreds of scars on his thighs, scratched by razor blades to divert attention from agony. The death of Mr. N was the end of the N family. The final paragraph of description said “The emotions of sorrow, sadness, anxiety and despair haunted every seemingly happy and peaceful moment after the atomic bombing, the pain for these survivors and their family would never ever be eased.” From the collapse of a single family and documentary style linear narratives, this story reflects the situation of the majority after the incident. Nuclear bombing not only caused bleeding wounds visible to naked eyes, but triggered those shatter and breakdown of family and anxiety to unknown diseases, lasting in people’s mind for a long time.

After stepping out the main exhibition area, following a bright corridor, glazing out of big floor-to-ceiling windows, viewers can see “Cenotaph for the A-Bomb Victims” in front and “Atomic Bomb Dome” in back at the Hiroshima Peace Memorial Park, radiating out in a straight line. This arrangement symbolizes ritual transformation of the collective trauma. Furthermore, starting from the beginning of the exhibition, visitors will see Hiroshima, 1945, covered in rumbles and ashes. At the end of the exhibition, they will come upon modern Hiroshima. This allows the visitors to easily sense the thoughtful details of the exhibition’s design and line planning (from a dark and winding exhibition route to the bright and straight aisle). Hiroshima Peace Memorial Museum attempts to take specific nationalities and identities away and turns those hurts into a profound issue. With the theme of anti-war and peace, this exhibition strongly proclaims its core purpose: “No More Hiroshimas.”