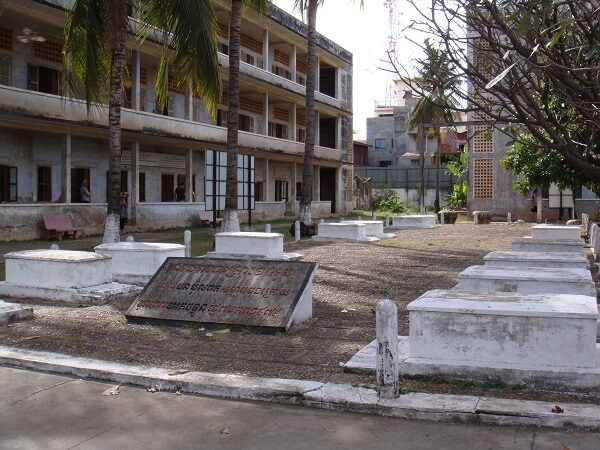 Before the regime of Khmer Rouge, Tuol Sleng Genocide Museum located in Phnom Penh, Cambodia, was just an ordinary high school. From 1975 to 1979, Democratic Kampuche (the Cambodia Communist Party) converted this facility into its S-21 security prison, and used it to imprison and interrogate political prisoners and intellectuals. In 1980, the prison was turned into a memorial, with the aim to disclose the atrocities committed during Khmer Rouge. This essay centers on how this museum uses negative heritage and dark tourism to interpret and present its traumatic past, connecting physical monument to intangible memory through its display, inspiring empathy in its visitors, and transforms pains and conflicts into positive energy, adapting a contemporary viewpoint to revitalize the historic value of the incident it focuses on.

‘Tis a December day when I visited The Tuol Sleng Genocide Museum in Phnom Penh, Cambodia. The sun was hanging high in the sky and the weather nothing like winter. However, when I stood upon this building, chills started to creep out of my bones and the sound of the city seems to just fade away, leaving this dead silent atmosphere, as if the spirits full of despair are still haunting this grey and simple building.

The cache of six thousand photographs taken between 1975 and 1979 at a secret prison in a former high school in Tuol Sleng, a suburb of Phnom Penh, the killing house of more than fourteen thousand Cambodians charged with being either “intellectuals" or “counter-revolutionaries."

The Tuol Sleng Genocide Museum is located in Phnom Penh, Cambodia. Before the Khmer Rouge controlled Cambodia, the location was just an ordinary high school. During 1975 to 1979, Khmer Rouge transformed this location into the notorious S-21 security prison which can hold more than 1,500 prisoners to imprison and interrogate political prisoners and intellectuals. During 3 years and 8 months of Khmer Rouge’s reign of the country, it was estimated that around 14,000 to 20,000 prisoners were killed at this site. During the same period of time, it is estimated that there were 150 more similar prisons in Cambodia to imprison and slaughter the Cambodian People. This Museum named after Pol Pot, the leader of the Khmer Rouge was re-built and opened to the public in 1980 in order to reveal the savage acts of the Khmer Rouge.

Pol Pot (1928-1998) was a descendant of Chinese immigrants in Cambodia. In his early years studying in Paris, he came across Marxism and became a communist. After returning to Cambodia, he established the “Democratic Kampuchea” which was heavily influenced by Maoism and Marxism. During a short ruling period of 3 years and 8 months, Pol Pot tried to remodel Cambodia into a proletariat society, and to focus all human power in agriculture. Politically, Democratic Kampuchea follows totalitarianism, and exercises an extremely high degree of control over public and private life, resulting in ethnic cleansing in Cambodia. The reigning era of the Khmer Rouge ended in 1979, when the Vietnam army marched into Phnom Penh, throwing over the Khmer Rouge government, and establishing a puppet state “The People’s Republic of Kampuchea.”

S-21, or Security Prison 21, at first was established by the Khmer Rouge as a place to imprison political prisoners from the previous Lon Nol regime and included soldiers, government officials, as well as academics and other intellectuals. Later the prison served for the purpose to cleanse and eradicate dissidents. When entering the S-21 prison, every prisoner would be taken a mugshot, had their body searched, shackled and listed. Prisoners lived in extremely bad conditions with parasites and diseases spreading amongst them. They seldom got food, and were constantly whipped or electrocuted and tortured. Prisoners only stay here for around 2 to 3 months before they were taken to Choeung Ek 15 kilometers away to be executed. Only 7 people escaped death out of all prisoners in S-21.

There are 4 concrete buildings inside the museum compound, originally classrooms of a high school. Khmer Rouge transformed the campus into a genocide camp.

An iron single bed is installed in the center of each classroom. When the Vietnam army breached the camp in 1979, they found bodies chained onto the beds and executed by the Khmer Rouge in such a rush. Images of the corpses onthe beds were preserved by photo and displayed on the walls nearby. The corpses of the dead prisoners were buried outside next to the running fields.

Building B displays the pictures and remnants of the victims.

Every prisoner would have two pictures taken during their time in the camp, one mugshot when they entered the prison, and another documented when they died or were executed. The Vietnam army discovered over 6,000 records of prisoners here. The photos showing the prisoners face with no expression, stimulates the visitors’ anxious emotions. Besides photos, the museum also displays the prisoner’s clothes like the Nazi concentration camps in Europe, piling up all the clothes in the display to resemble the great number of victims who suffered and ended their life here.

There was also an interesting rumor worth mention about the chair and equipment for the prisoners’ mugshot. Rumor says that the chair and equipment were designed to torture the prisoners and the executioners would open a hole on the victims’ heads in the back and their brains would drop out till they died. However, it was proved later that the chair was only used to fix their bodies so the prisoners would look straight forward to take a clear mugshot. These kinds of rumors spreading on the Internet emphasizes the hatred of the visitors however is far from the truth.

Building C is filled with small cell rooms that used to be classrooms.

Classroom was separated into around 10 individual cells that are 1 square meter with wooden boards or bricks. Prisoners shall keep their shackles on even when they are inside the cell. Because the space is too small, it is difficult for the prisoner to lie flat when sleeping. The building is also surrounded with iron fences to prevent prisoners escaping or jumping to their death.

Building D displays the instruments of torture and drawings of the survivors.

Vann Nath, one of the few survivors of the prison, brought his talent into play and drew pictures of the Khmer Rouge violent acts in S-21, so the visitors could feel the terror at that time when visiting the museum.

The running field that was once filled with laughter, was also transformed into a place for interrogations. Existing frames and tanks were also used to torture the prisoners. A sign written in Cambodian, English and French standing on the fields, was said to be the codes and conducts of S-21. However, when Kang Kek Lew, the chief of S-21 testified during his trial, he said that the signs were made up by the Vietnam Army when they invaded Phnom Penh and breached S-21, they did not have these codes when they were running the camp.

Further investigation by the UN discovered that besides the prisoners in the camps around the country, another 2 million people died from famine, forced laboring, diseases and other irregular reasons. The death toll was 25 % of the total population in Cambodia at that time. During further investigation, 9,138 burial sites and nearly 1.5 million bodies were discovered. The most famous site was Choeung Ek 15 kilometers from Phnom Penh where the Cambodia government also established a memorial and Buddhist temple in order to pay homage to the victims.

Tuol Sleng Genocide Museum preserves the entire historical site of the S-21. Combined with the files and photos of the victims, not much literature was needed to remind people how this place was. There was not much interaction with the visitors, but could penetrate deep into their hearts. The museum is one of the must visit spots for international tourists. Through research, publicity and social media, the history of Khmer Rouge became well known to the global society, and also leaded to the Extraordinary Chambers in the Courts of Cambodia in 2009 to bring the leaders of the Khmer Rouge to trial. However, this was still a relatively new incident for the Cambodian people, and many were still afraid to discuss about this incident. Younger people mostly heard of the Khmer Rouge through verbal discussions with the elder. It was not until 2009 that the Ministry of Education of Cambodia listed Khmer Rouge into high-school history curriculums.

This historical memorial site built as a negative heritage and based on dark tourism, preserves the actual historical scenes, displaying mostly remnants and photos. The museum simply preserves this sorrowful era and voices out their accusation without much words. Entering the museum is like entering a completely different world, as if the time was frozen at 1979. Visitors are able to visit silently and fell the history that had actually happened at this site. Through this kind of display, the visitors’ empathy and moral could be stimulated; history could be learnt and digested to transform the sorrow and conflict into positive energy as lessons for the future. Through these visits, people can recognize how lucky we are to live in a free and peaceful world. Inside the museum, monuments and memories were linked with each other, displaying the memories of the survivors and also how modern Cambodians see this incident, so that history could be preserved and serves as a resource and experience for this country and this society. However, we yet have a standard answer on how to interpret this historical wound.

Photographs of the suffering and martyrdom of a people are more than reminders of death, of failure, of victimization. They invoke the miracle of survival. To aim at the perpetuation of memories means, inevitably, that one has undertaken the task of continually renewing, of creating, memories—aided, above all, by the impress of iconic photographs. People want to be able to visit—and refresh—their memories.

When I was visiting, I didn’t want to photo these heartbreaking views in order to show my respect to those who passed away. However, what I have seen still deeply lays in my mind, till today.