Held every three years in Bangkok, Thailand, the SEAMEO SPAFA International Conference on Southeast Asian Archaeology (SPAFACON) is a major avenue for scholars to share and disseminate archaeological research and propose new ideas about cultural heritage promotion and protection. Each year, papers concerning the operations of museums and the safeguarding of Southeast Asian artefacts and antiquities form an important component of the conference. This article gives a brief introduction to the work of SEAMEO SPAFA in relation to museums before presenting two stimulating papers presented at SPAFACON 2019, one addressing the current trend of decolonizing museums and the other proposing an unconventional means of protecting cultural heritage.

What is SEAMEO SPAFA? Entering museum world from archaeology, fine arts and heritage

The world of cultural heritage, which is what we usually think of when talking about museums, concerns a wide range of knowledge and skills. According to the UNESCO Competency Framework for Cultural World Heritage Sites, which is still in the drafting process, the management and conservation of archaeological and historical sites and their objects requires many specialized technical competencies, namely anthropology, archaeology, architecture, traditional craftsmanship, development planning, engineering, geography/cultural landscape, intangible cultural heritage, landscape design, materials conservation, museology and urban studies. This framework is relevant to the operations of museums as it offers a rather comprehensive list of disciplines that any museum may need training in. Now that today’s museums are ever more diverse in terms of their content, an extensive body of knowledge is required to properly look after and present museum collections and develop appropriate educational and outreach programmes.

With three flagship programmes, namely “Advancing Southeast Asian Archaeology” for the field of archaeology; “Sacred Universe” for the field of fine arts; and “Conservation in the Tropics” for the field of heritage and conservation, the Southeast Asian Ministers of Education Organization Regional Centre for Archaeology and Fine Arts (SEAMEO SPAFA) 1 incorporates most of the disciplines mentioned above to implement its programmes. In fact, many beneficiaries of the centre’s activities, both as resource persons and participants, go beyond the professions of archaeologists, fine artists and conservators to include museum professionals of different positions. Their expertise contributes to the richness of our programmes and their participation enables the overall landscape of cultural heritage to thrive.

Since its inception in the 1970s, SEAMEO SPAFA has engaged with museum administrators, curators, educators and conservators in different capacities, from trying to establish a regional network of museums for collaborative projects to promoting in-house research and enhancing specific knowledge and skills related to collections management and conservation. Our early activities put a strong emphasis on artefact conservation, such as the training courses and workshops on the conservation of bronze objects, ceramics, underwater archaeological objects, traditional handicrafts and organic materials. These were carried out in the late 1970s and early 1980s, back when this kind of knowledge was scarce in Southeast Asia, and resulted in the recognition of SEAMEO SPAFA as a leading regional organization in cultural heritage conservation. One important legacy is our co-launch of the CollAsia programme with the Rome-based International Centre for the Study of the Preservation and Restoration of Cultural Property (ICCROM) in 2002. Although SEAMEO SPAFA has no longer had its involvement in CollAsia since 2012, this important educational programme continues to empower heritage collections professionals in Southeast Asia.

SPAFACON 2019: Advance knowledge about museum and heritage in Southeast Asia

The SEAMEO SPAFA International Conference on Southeast Asian Archaeology (SPAFACON) is a major project in our archaeology flagship programme. Hosted in Bangkok every three years, it is therefore the only international conference that takes place in the region on a regular basis and is particularly welcoming to Southeast Asian archaeologists and scholars in related fields who may lack opportunities to present their research or new ideas at events organized outside the region. 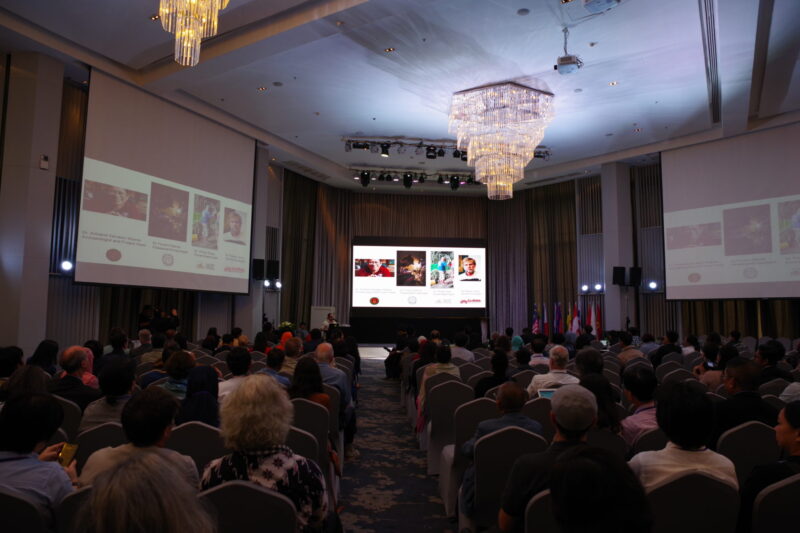 At the 3rd SEAMEO SPAFA International Conference on Southeast Asian Archaeology, which took place from 17 to 21 June 2019, several museum professionals, among others, joined archaeologists to advance knowledge about cultural heritage in Southeast Asia. The conference was divided into 23 sessions based on the themes of the accepted papers. Most of the museum-related papers were presented in Session 12: Colonial Heritage in Southeast Asia: Current Research, Conservation and Management and in Session 21: Law and Policy in Heritage Management: Perspectives in Ethics and Repatriation. Here are two papers, one from each of the mentioned sessions, that should provoke museum and cultural heritage professionals to think about the current landscape of their fields and what they may do to contribute to the ongoing conversations surrounding their work.

Value in Preserving Colonial Heritage, Which Ones Should We Preserve?

While most of the papers in Session 12 focus mainly on the physical features of sites of colonial past that the presenters proposed conserving and touch on the colonization of their respective countries only briefly, Gultom provided a more extensive account of Indonesia’s colonial history to raise tough questions about the value of conserving colonial heritage. Having recounted the rarely mentioned massacre of indigenous people in Banda Island, the first place of colonial violence in Indonesia, she went on to question if Jan Pieterszoon Coen, the General-Governor of the Dutch East India Company (VOC) and the founder of Batavia, now Jakarta, should today be considered a war criminal, not the hero who brought VOC and the Netherlands prosperity. Then, she criticized how Dutch colonialism is presented in a sterilized manner in Dutch museums, leaving out traces of violent oppression, and how racist elements also still exist in their displays.

Although Gultom did not give a direct answer to the question in her paper’s title, many questions she raised throughout her presentation should lead to further dialogue on how former colonies may deal with their past and colonial heritage. One important question she asked, in light of the trend of museum decolonization taking place in the West, was whether museums in former colonies should get on board (and in what manner this should be carried out). Referencing one of the exhibitions she curated at the Jakarta History Museum in 2017, Gultom chose to highlight the violent history of colonialism in Indonesia, which had rarely been presented in Indonesian museums, and re-examined key events and figures in the process of Indonesian colonization. She noted that her Dutch colleagues made a complaint that the exhibition was “gory”, although Gultom believed the displays offered a more truthful depiction of the past.

Based on Gultom’s paper, there are several questions that we can entertain ourselves with. First of all, what does decolonizing museums and collections actually mean to any museum of a former colonizer or a former colony? Will people understand colonialism differently once museum collections have been decolonized and more politically correct language adopted in museum displays? What can museums do to help former colonizers make amends for their past and former colonies to heal at the same time and should this be the role of museums? And should museums of a former colony pay more attention to their own colonization of other territories, too? These are some of the discussions to look forward to in the future conversation about colonial heritage and decolonization.

Apart from the topics above, it is worth mentioning a publication titled “Words Matter: An Unfinished Guide to Word Choices in the Cultural Sector” by the National Museums of World Cultures in the Netherlands. The publication represents one such attempt by Dutch museums to decolonize their collections, paying attention to how they use their words to describe objects and the cultures these items belong to. Museum professionals and the general public will find the publication useful in how they think and talk about other people’s cultures, including the minorities in their own societies. 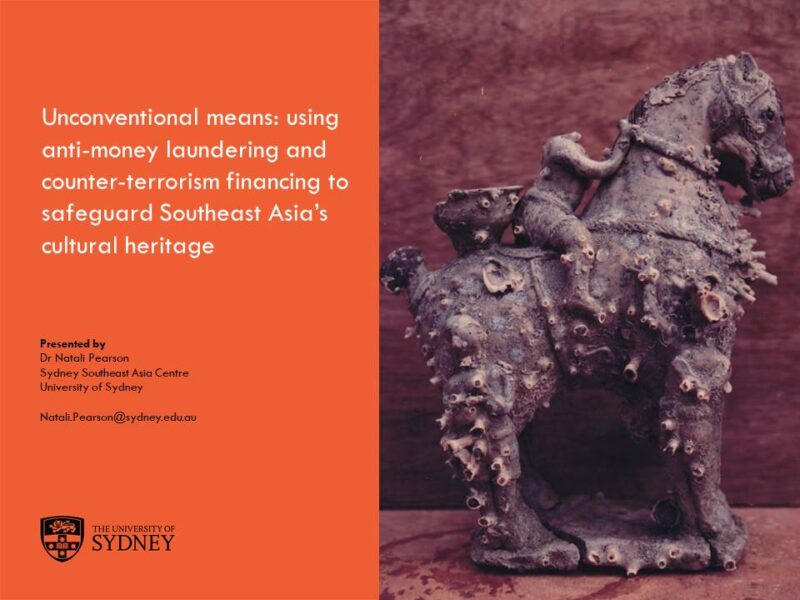 Safeguarding of cultural heritage is an important issue worldwide. At the start of Session 21, Gallagher pointed to the ineffectiveness of international law on cultural heritage and properties due to its soft law nature, which has no legal binding force. For better protection of cultural heritage, Pearson proposed reviewing and using anti-money laundering and counter-terrorism financing standards that are already widely implemented to better deal with illegal trafficking and trade of cultural goods, specifically underwater cultural heritage. One strength of these standards is that they are more likely to produce prosecutions.

The two international bodies working to combat money laundering and terrorist financing cited by Pearson were the Financial Action Task Force (FATF) and the Asia/Pacific Group on Money Laundering (APG), the latter having Cambodia, Indonesia and Thailand as its members. The FATF has issued the FATF Recommendations, which are the international standards on combating money laundering and the financing of terrorism and proliferation of weapons of mass destruction, also implemented by the APG. The FATF Recommendations, which include 40 items, provide a list of predicate offences for money laundering, including illicit trafficking, counterfeiting and illegal trading of different kinds, though they do not specifically mention cultural goods or antiquities and do not require key players in the movement of these items to report suspicious transactions. Therefore, Pearson’s proposal is to “include trafficking in cultural heritage as a predicate offence to money laundering”, “make antiquities dealers and auction houses ‘reporting entities’” and “draw on methods, indicators and vulnerabilities from other trafficking typologies (drugs, tobacco, humans and wildlife)” for the safeguarding of cultural heritage. This is indeed a very interesting suggestion, but one that will require a lot more communications and political will to be turned into reality.

Apart from the two papers highlighted in this article, there were many other papers concerning museum work and cultural heritage presented at the SPAFACON2019. For example, Tolentino strives to enrich the history of the Baliwag Municipal Museum in Bulacan, the Philippines; Thamwongsa presents the archaeological findings at the site that is today Museum Siam in Bangkok, Thailand; Sandy proposes the construction of an underwater museum at the MV Boelongan shipwreck site in West Sumatra, Indonesia; Kirana examines how women are represented in exhibition narratives at the Sonobudoyo Museum in Yogyakarta, Indonesia; and, of course, Gallagher, already mentioned, considers the effectiveness of international law to protect cultural heritage in Asia in the past 70 years.

Next in line for the SPAFACON2019 is the publication of the conference proceedings, which will probably take over a year to finish. It is hoped that all the aforementioned presenters will decide to publish their papers in full. Meanwhile, there have already been some discussions at SEAMEO SPAFA on the possibility of turning the SPAFACON into an international conference on both archaeology and fine arts, which will undoubtedly result in an increased number of papers from museum professionals. If this happens, it will be good news to see more scholars and practitioners contribute to the expansion of knowledge of Southeast Asian cultural heritage and the field be driven forward from both academic and practical perspectives.

【Museums Link Asia-Pacific】Make the Spirit of Free Speech Spread Out: The Challenge and Practice of Nylon Cheng Memorial Museum