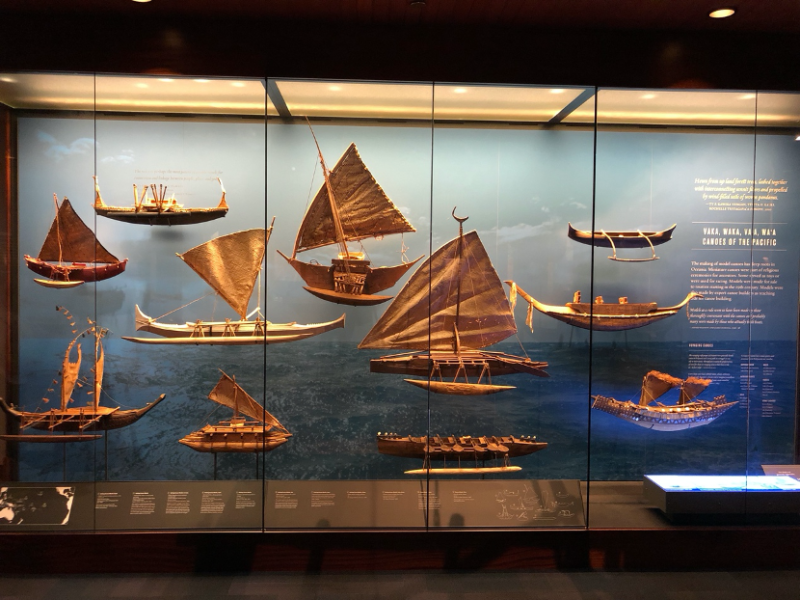 The blue light of Pacific Hall showcases a variety of canoes in different regions of the Pacific developed because of currents and winds. (photo by Lin Fang-Chen)

Author/Photography: Lin Fang-Chen (Research Assistant at the Department of Research and Collection, National Museum of Prehistory)

A safety line of other culture drawn by museums

Taiwan is a member of the Austronesian world and yet the mainstream society often neglects or rarely has the opportunity to understand Austronesian culture and its community that are so closely connected to us. Museums, as fields to increase social education and citizen literacy, oftentimes see other cultures as in a static “safe” state in traditional displays, and therefore, fail to connect with them. If we are to explore how diverse ethnicity converges and the historical typology of a settlement and colonization society, the display at the Hawaiian Hall and the Pacific Hall at Bishop Museum may be an example that helps us reflect upon this issue.

A museum dedicated to the prince of Hawaii

Bishop Museum was founded in 1889 by Charles Reed Bishop in honor of his wife Princess Bernice Pauahi Bishop—the last descendant of the royal Kamehameha dynasty. The museum houses over 25 million collections in various subjects, including anthropology, archeology, biology, botany, entomology, etc. It is the largest museum in Hawaii and the center of Pacific study for the US. Bishop Museum sees transformation, re-energization and re-engagement as its ten-year (2016-2026) strategy, hoping that the displays showcase the rights of the local community—Native Hawaiians and guide visitors to think about the history and culture of Hawaii and the Pacific, and to explore the issue of environmental sustainability.

Into the world of Hawaiian gods and the sea

Bishop Museum Exhibition Hall is a three-story Victorian-style building. The right-hand side of the entrance was built in 1889, and was renovated into Hawaiian Hall between 2006 and 2009. Different floors showcase different exhibits. The theme of the first floor is “Kai Ākea” (the sea). Exhibits, including the sperm whale and the double hulled canoe hung at the center of the hall, and traditional architecture and the sculpture of Kū (the god of war), etc., lead visitors into the world of Hawaiian gods and the sea. The Hall also showcase the material culture created by the power (mana) of Hawaiian Dynasties and their nobility (Ali‘i) and their corresponding taboos such as capes worn by leaders (Ahu‘ula).

The second floor “Wao Kanaka” (the lowland) showcases “traditional” daily necessities and ritual artefacts. What impresses me most is an introduction that displays across the corridor and tells how the traditional Hawaiian calendar was calculated based on moon phases. It demonstrates how indigenous people in Hawaii see time and value the circle of life. This echoes perfectly to the contemporary artwork “Kumulipu-Ke Ao” (The Creation Story) at the entrance, which shares the same connotation.

The theme of the third floor is “Wao Lani” (the forest and mountains) and demonstrates the role royals and nobility played on land power (ahupua‘a) and land resources. It also showcases historical events such as in 1893 when the dynasty was overthrown, in 1898 when there was petition against the annexation treaty, and in the 1970s when Hawaii went through the second renaissance. These events highlight how the contemporary identify with the diversity and mixture in Hawaii. Diamond (2015) thinks that Hawaiian Hall, after renovation, reflects the mindset, and concept of languages and mobilityof Hawaiian people, and demonstrates Hawaiian spiral sense of time where all things are connected through the exhibitioninvolving oral traditions, life cycle and linear history. The Hall allows visitors to immerge in a Hawaiian cosmology with both time and space.

The blue continent that connects our life together

Following the beautifully carved wooden stairways located at the center of the entrance to the second floor, one sees the slit drum that is used to announcing entry of visitors from Vanuatu, which is usually put at the entrance of a village. Pacific Hall (known as Polynesian Hall before renovation) is located at the attic. It was established in 1894 and the renovation was completed in 2013. The Hall has two floors and the overall design revolves around the concept of Our Sea of Islands, proposed by Tongan Scholar Hau’ofa. I originally thought that the display would be more separated with geology categorizes different regions; instead, a commonality is highlighted among the differences. With the blue light in the display case and the different canoes in regions of the Pacific developed because of currents, an image of “being surrounded by the sea” and “how we can connect in the vast ocean” is showcased.

Based on anthropology, the displays are in four categories, political, economic, religious and relational aspects. Pacific Hall, though focusing on social relations such as daily life, beliefs, clothing, music, dances and wars, showcases those topics in a poetic manner. “Blue Continent”, “Ancestors’ Course”, “Unity in Diversity”, just to name a few. But there certainly are more traditional titles as well such as “The Gathering Zone”, “Foods from the Land”, “Chiefs and Leaders”. The Hall demonstrate the life of Pacific people in the past through delicate pieces collected from various regions.

The second floor focuses more on archaeological issues in the Pacific, showing how contemporary archaeologists work in the field and the contemporary use of traditional culture, such as the relations between geometric patterns and tattoos in Lapita culture and Polynesian culture (see Note 1), so that visitors would not be lost in the relatively technical archaeological displays. I actually found Taiwan in Pacific Hall. Aside from spotting the Austronesia map embedded in the wooden floor of the corridor marking the location of Taiwan. I also found archaeological findings of the Dapenkeng culture and display of Atayal wedding accessories. These are all the latest findings of Bishop Museum regarding the Austronesian culture.

Why should Taiwan be a member of the Austronesian world?

Some comments think that the museum lacks the voice of the Pan-Austronesian, ignores the impact of colonization (e.g., Christianity, military vases, the intervention of politics and capitalization, etc.), and portrays a Pacific culture that is “comprehensive and perfect.” However, the display and the collection of Bishop Museum can serve not only as a database for local residents to find connections with the past, but also as a medium for foreign visitors to know Hawaii. It is a concrete symbol of cultural subjectivity and Hawaiian identity.

My field study in Hawaii happened to coincide with the period when the US government planned to build an observatory at Mauna Kea on Big Island. I saw from the news that people used cultural symbols (e.g., sculpture of Kū and singing of epic poems) as a way to protest. The artefacts displayed in the museum are dynamically and closely connected to what is actually happening and to people’s life. If we are to compare the situation with that of Taiwan, in addition to academic evidence, we should reflect upon why it is that we want to be a member of the Austronesian world. What does Austronesia represent? And how do we connect with the Austronesian community through exchange of contemporary issues?

Note 1: Traditional tattoos are limited to showing certain identities and abilities whereas contemporary tattoos are more about cultural identity and about patterns that merge tradition and modernity.